A Chakma poem by Promode Bikash Karbari titled ‘‘Jummobi Parani Mar’’ (‘‘Jummobi, My Darling’’) is one of the most cherished cultural works of the 1970s. The poem was first published in Burgee (the Chakma name of a legendary bird once common in the forests of the CHT, now believed to be extinct), as the second publication of the Jumia Bhasha Prachar Daptar in 1973, under the author’s pen-name Phelazeiye.

The poem captures the spirit of the time, highlighting the reterritorializing of gender in the frame of Jumma nationalism. Suhrid Chakma, a well-known CHT poet and literary critic, and Nandalal Sharma, a Bengali researcher on CHT literature, referred to the poem as ‘‘a milestone of modern Chakma poetry.’’ Jummobi is the Chakma term for a maiden in the jum. The beauty and magic of the rhyme, stanzas, and words of the poem entice readers with the poet’s longing for a long-lost jum-based culture.

The poet, Kabari, uses the character of Jummobi to depict the CHT’s socio-politico-cultural situation, articulating traditional images, codes, and symbols, and appropriating the role of gender to the demands of the time through poetic imagination. Karbari describes sites of domestic architecture and domesticity but also reminds the reader of a past rich in the triumphs and tragedies of historical and legendary protagonists.

Here is the English translation of the poem:

The prelude of the poem focuses on the tearful eyes of the poet’s darling Jummobi. It laments how Bengali mores have come to be the standard for measuring Jummobi, leading her to forget her own uniqueness – the modest beauty of a sensibly clothed (‘‘tuck your pinon tight’’ and ‘‘put on your… khadi decently’’) industrious woman of the fields. The poet addresses Jummobi as the ‘‘Champak beauty,’’ reconnecting her with a forgotten past, the prosperous ancient legendary Chakma city named Champak Nagar. It appears that after wondering a long time and enduring the suffering arising from neglecting and forgetting her own identity, Jummobi has perhaps returned to her own, rightful self.

The interlude of the poem portrays an atmospheric sunset in the deep forest where crickets/cicadas are droning, beautiful Burgees are flying toward the distant mountains, while Jummobi, at dusk, is walking the jum path along the mountain ridge carrying a work-basket called a kallong on her back. There is rejoicing in anticipation of Jummobi’s return, which marks the return of the idyllic communal life in the hills. There are memories of sloping jum field of kabarok, a delicious, fragrant rice variety grown only in abundance at the top of the mountain. There are memories of moonlit nights, listening to the flute, singa, duduk, and khengarong, on the eejore, the open bamboo deck at the front of the jum platform house. There is mourning for the absence of the legendary hero Radhamon, the brave senapati (general) of Champak Nagar, and beautiful Dhanpudi, the childhood friend, lover, and, later in life, partner of Radhamon.

The climax of the poem, which is brazen with the hope that there could be a resurrection of lost jum culture, portrays a sunrise with the jum covered in white sudophul (cotton flowers), and full of song and laughter. The poet, acknowledging the strength required for resistance, urges Jummobi not allow herself to be the victim of injustice like the tragic heroines Tannyabi and Sandobi, traditional pinon of jighaphulpattern, and a red khadi, but to be the hardworking young woman wearing a pristine who remains the faithful Dhanpudi of Radhamon. Jummobi, the protagonist in the poem, is identified here not only as a darling maiden but as the symbol of the land, the CHT itself. The poet’s depiction of the land as ‘‘partner’’ and ‘‘lover,’’ here deployed toward a new nationalism, contrasts with the usual depiction of the land in Bengali literature as ‘‘mother.’’

The poet presents regret, forgetfulness, and neglect with the metaphor of the sunset and hope and aspiration with the sunrise over the jum.

All the emotional elements in the piece are, in a way, also a reflection of the poet’s own experience, the poet’s literary journey, because this was Karbari’s first published poem in the Chakma language.

This piece of writing is taken from ‘Indigenous Women and Culture in the Colonized Chittagong Hill Tracts of Bangladesh by Kabita Chakma and Glen Hill’. 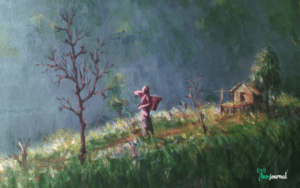 Poem: The Rebel and a Painting

Poem: The Hills & The Howling of Owl